The question comes in the form of a Windows PE32 binary. Attempting to run it causes it to print out "KABOOM!" and then exit. Running strings on the binary prints out the string UPX and the version 3.95. There is also a YouTube video indicating that there's some trickery being pulled, but I didn't pay enough attention to this. Unpacking the binary with upx -d and then inspecting in IDA shows a very simple function for main. 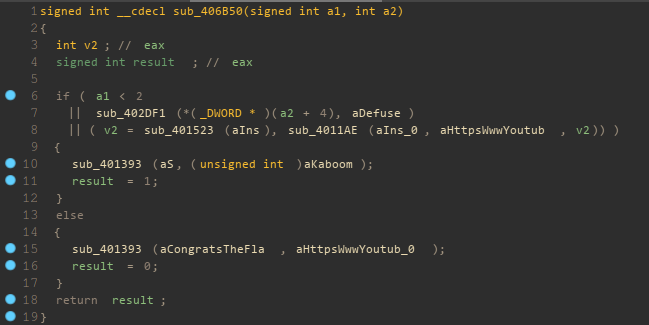 While IDA could not recognize the library function calls in main, it was fairly obvious from their arguments and return values what each of them were.

From here I could now see that the function expects that the first command-line argument is defuse and that some variable in memory matches with the YouTube link in order to print the YouTube link? Clearly the YouTube link is a placeholder for a different value in memory and that value is being written into memory at some point. IDA did not detect that the YouTube link in memory was ever modified, and an extremely unrolled strncmp led me to think that maybe there was a trick that overwrites memory without IDA's analysis being able to detect it. I wasted a few hours on this path until eventually realizing that this wasn't the right way to go.

I decided to return back to the packed binary and see if there were any shenanigans there that I missed. The decompiled code for the UPX stub was a mess so I used Windbg to step through the unpacking process. Here I'd see that GetCommandLineA was being looked up and called during unpacking, indicating that the unpacking process was reading a command-line argument and using it for something.

Stepping further through the code reveals that during unpacking the program compares the command line to a 13 byte constant value and if the values match then to load an alternative part of memory in. 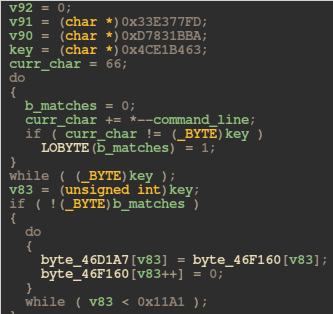 Using Python, I wrote a simple function for generating this string. I actually could have just patched the register values during runtime to skip over this check, but I didn't know at the time if the binary would use the string again later.

Putting everything together, I ran the packed executable again with ./kaboom.exe defuse Plz&Thank-Q! and out came the flag:

Had I not been such a Pepega and taken my time to not get bamboozled, I could have done this much faster.

Most CTFs attempt to balance the learning aspect of a problem with some level of tediousness so that the answer is not too trivial. This question has little learning to it (a bit on windows PE32 binaries and UPX packing), and tricks the user into wasting time looking for a red herring. Not very fun.