This problem had no initial description. It was given to me with the offer of getting a calc.exe sticker if I managed to pop calc. Eko2019

The binary provided I need to pwn is a PE32+ Windows executable. Running the binary prints the following:

and then hangs. Using the references to these strings in memory finds us the function that's the most likely entry for our program's logic. Most symbols for functions were available after loading a MS symbol server into IDA. Some reversing still needed to be done on local variables to understand their purpose.

This is the code after some cleanup. 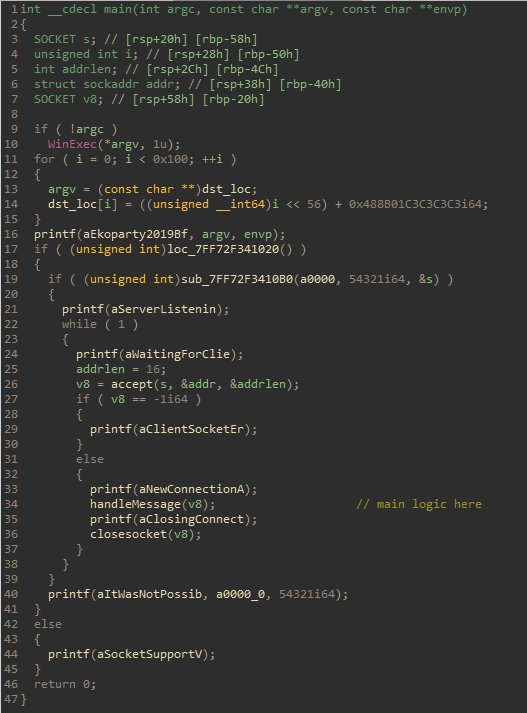 Looking at the decompiled code for this function in IDA, we see that it opens a socket on port 54321, and waits for a connection. Upon receiving a connection, it passes the established connection to another function for further processing. The function handleMessage first checks the first 16 bytes received from the new connection, expecting the first 8 bytes to be the cookie Eko2019\0, followed by an 8 byte value representing the size of the following write. Adding this header struct to IDA cleaned up the decompiled code a bit.

This is the important part of the handleMessage function after some cleanup. 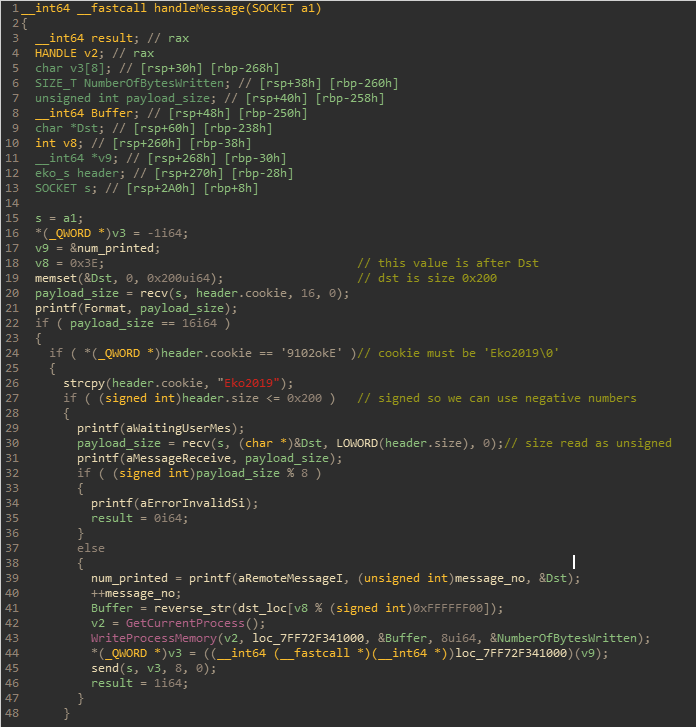 Aside from the header check, a couple things stand out immediately. The first is that the size check in the header uses a signed value when checking its upper bound, but an unsigned value when using it to read additional input from the connection. This means that it's possible to write more data than the size of the Dst buffer, resulting in a stack overflow. However, attempting to use this stack overflow to get code execution directly is no good, as there is a stack canary located just below the header struct in the stack (an IDA decompiler bug hid the canary logic in the decompiled code).

This function takes nSize bytes of memory from the location lpBuffer and writes into to lpBaseAddress inside of hProcess. In this program's case, it's going to write 8 bytes from a buffer created by the function call to reverse_str with the args set to dst_loc[v8=0x3E]. The value is going to be written into memory and executed as a function with v9 as its argument, and the result will be sent to us by the call to send. The address of the value we're sent comes from dst_loc, which was set to a series of values in main.

Earlier I mentioned that the stack overflow we get from abusing the signed comparison and unsigned use of the size we pass in couldn't be used to get code execution, since there is a stack canary. However, we can still use this stack overflow to overwrite anything between the Dst buffer and the end of the stack for the current function.

In particular we see here that v8 and v9 can be overwritten when Dst is overflown. v8 is the variable used to index into dst_loc to obtain the address whose value we're going to be sent, and v9 is the argument passed to the function selected by v8. We can overwrite v8 and have it set to any index of dst_loc we want, and we can override v9 to get any argument value for the function we select from v8.

Using a small script we can generate all values contained inside of dst_loc to see if there are any useful values to use as shellcode (we could also have read them from memory after being generated but this was about just as easy).

Of the values generated by this script, 2 of them are useful for our needs.

Why are these 2 snippets of shellcode useful? In the case of index 0x66 it gives us the ability to read any 8 bytes from program memory that we know the address to. For index 0x65 we need to know more about Windows internals.

On AMD64 (Linux) based systems, the segment register gs is used to obtain CPU-related information for the process during runtime. However, for Windows systems the gs register is used to store the Thread Information Block (TIB). This block contains a lot of useful information the thread may need to lookup when switching in and out of context. One particularly useful item the TIB stores at index 0x60 is the Process Environment Block (PEB), which stores the lowest-level information needed in userspace and the highest level information needed in kernelspace. From here at offset 0x18 we can find the address to the ldr, a data structure used to store pointers to all loaded modules available in the process' space. It stores this information in the form of a linked list known as the InMemoryOrderModuleList (IMOML), whose head can be accessed at offset 0x20. The structure of an entry in this list is as follows:

The first DLL that's loaded into our process is our binary, so reading offset 0x20 (we start at the list entry and move 0x20 down from there) will get us the base address of our binary. With that, we now have all the tools we need to start forming an exploit.

While the vulnerability above is pretty useful, there's still a lot of work to be done if we want to pop calc on this program. We still need to get the following things:

How a canary is stored for a binary on Windows is different from Linux. On Linux the canary is stored at fs:0x28, which is where glibc places the stack guard value each time the process is run. On Windows the stack canary location is hardcoded into the binary at a set offset, which we can easily find by looking at the binary we have. In this binary, the canary is offset 0xC240 from the starting address. From what we saw in the previous section, we know the base address of our binary and we can therefore use the same vulnerability as before to get the canary value baseDLL+0xC240.

Unfortunately, this isn't the actual canary value we're looking for. If you look back to the assembly code used to set the canary value at the top of the function handleMessage you'll notice that the canary is xor'd by rsp. In order to get the true canary value, we'll need to leak the value of rsp at the time of our function. To do this we can read from gs:0x8, which corresponds to the stackBase in the TIB and gives us the base of the stack in our process. While we could attempt to compute the exact offset from the stack base that our rsp should be at, I opted to instead brute force the value by reading upwards on the stack until I reached a value I was sure I knew the location of relative to rsp. After that, I read upwards the necessary offset on the stack to get rsp and xor'd it with the canary leak to get the true canary.

Using the IMOML address we obtained earlier, we can read further into the linked list to obtain list entries to other DLLs that were loaded into the process. Since we want WinExec so that we can run calc.exe, we'll need to read through the IMOML until we get to the kernel32.dll. WinExec is always loaded to the same offset from the kernel32 base address for the specific version of Windows, so we just need to get the base address and we're good. There's also ways to get the WinExec address if we don't know the version of Windows], but they were unnecessary for this problem. After leaving the entry for the process DLL, we'll end up at the NTDLL module. Going one step further brings us to the kernel32 module's entry where we can get the base address like we did before. In this binary's case, WinExec is also loaded as an external function so we can get it by doing procBase+offset as well.

Now that we have our function to pop calc.exe and the true stack canary, we can form a ROP chain to get what we came for. I'm not going to go into too much detail about how I made this ropchain, but I used ropper to get all possible gadgets and then found the ones that were useful for setting up a call to WinExec. I reused the buffer provided to store the path to calc.exe and the same technique I used earlier to get the stack canary to get the address of the buffer so I could pass it as an argument to WinExec.

You can see my full exploit below.

Finally, the full exploit has been assembled and we can get that sweet, sweet calc.

Here's the exploit spamming a few hundred connections while brute-forcing the stack. 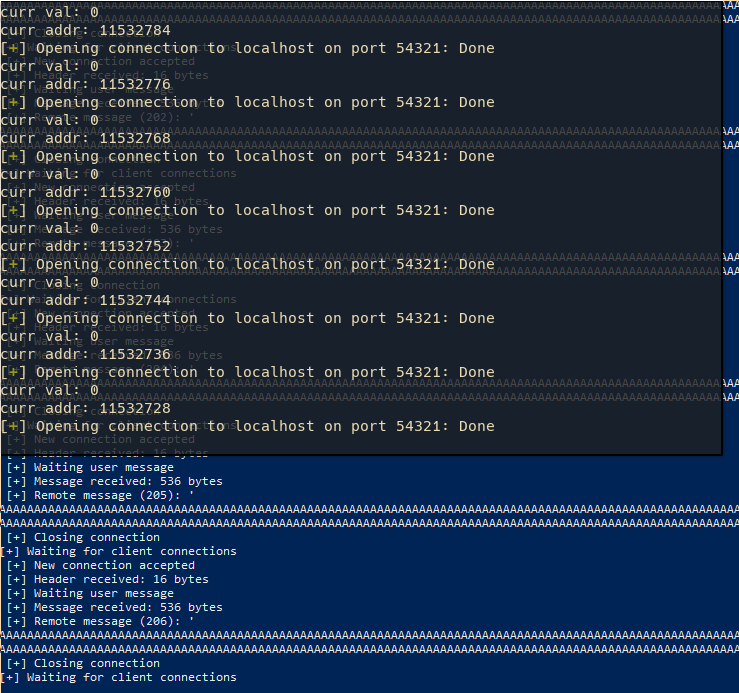 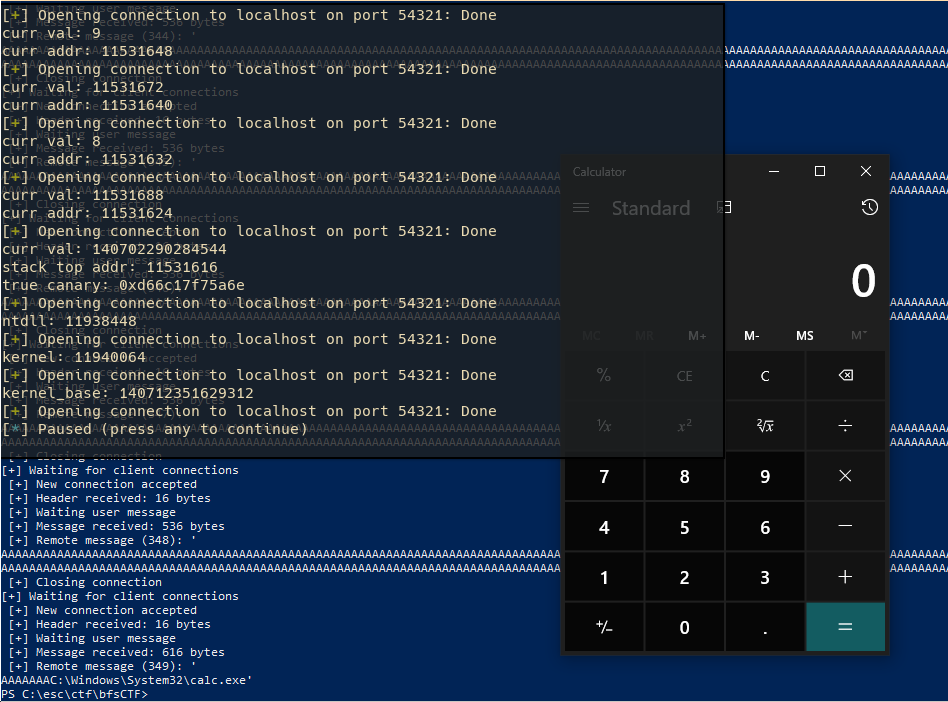 I'm not much of a fan of Windows, but pwning it was pretty cool. This problem was what I wish more CTF problem writers would use as inspiration when writing Windows problems, as most of the time it's some boring and unfun .NET or VB reversing problem. Working on a Windows problem instead of a Linux problem also meant I came away with significantly more new knowledge, since this was a domain I rarely see or work on during CTFs.

Note: I left out in this writeup the hours I spent trying to understand the Windows internals structure from within Windbg because, in reflection, I've realized that much of this problem could have been done completely statically. There's always a fine balance that needs to be found between spending time looking for information and paths to approach a problem, and it's one of the skills I still need to work on when it comes to CTFs and also my career.